I was nervous because I don’t cope well with crowds, and I didn’t really get how it all worked, and the Convention Centre is immense. But I met up with the lovely James of BookChic (check out his blogoversary posts if you haven’t already) who explained how things worked, and that yes it was alright to take books. I did have visions of being arrested (you know like in that one BSC book, where they go to New York and Mary Anne takes a sample lipstick and security stop her. BSC scarred me far more, than Forever, ever could.)

Anyway, James also kindly lent me his copy of THE MOCKINGBIRDS by Daisy Whitney. So excited to read that one. He also told me who published most of the books I wanted. He was a regualr goldmine of information. Thanks James 🙂 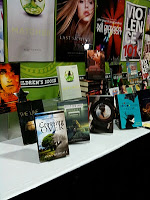 After I left James, I wandered over to Penguin to see if they had an ARCs of ANNA AND THE FRENCH KISS (they did and I’m so excited to read that too. I love Stephanie Perkins blog). The first thing I saw though, was RESTORING HARMONY by Joelle Anthony.

I was so excited to finally see this brilliant book in the wild. Isn’t it pretty? It was the second most exciting event of the day. The first being. . .

. . finally getting to meet Elizabeth Scott (so great after the library debacle) and her knowing who I was before I introduced myself. Which shows an extremely impressive memory on her part! Here we are at the GRACE signing. I don’t think I was too fan girly. 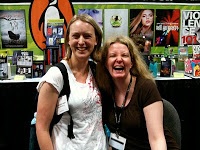 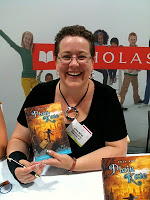 I also met Erin Bow, whose book, PlAIN KATE I’ve been dying for since way back here when it was my Waiting on Wednesday pick. I’m so excited to have gotten my hands on a copy. I started it on the metro home and it’s wonderful. Taggle may be my new favourite fictional animal, after Bonegrinder, of course.

Speaking of which there were no ARC’s of ASCENDANT left, so sad, and only a display copy of REAL LIFE BOYFRIENDS by E. Lockhart. I was tempted to steal it, but thought of the baby (and Mary Ann) and refrained.  I can’t really complain though as I came home with all these lovelies. 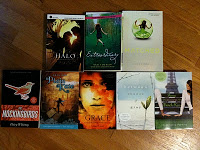 Sorry for the rambling and the over use of the word excited, but I was very excited. I spent my teenage years being too cool to get excited, so it’s all coming out now! Normal service resumes tomorrow.

Email ThisBlogThis!Share to TwitterShare to Facebook
Labels: ALA, ARC, books