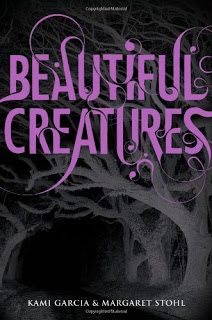 There were no surprises in Gatlin County.
We were pretty much the epicenter of the middle of nowhere.
At least, that’s what I thought.
Turns out, I couldn’t have been more wrong.
There was a curse.
There was a girl.
And in the end, there was a grave.

Lena Duchannes is unlike anyone the small Southern town of Gatlin has ever seen, and she’s struggling to conceal her power and a curse that has haunted her family for generations. But even within the overgrown gardens, murky swamps and crumbling graveyards of the forgotten South, a secret cannot stay hidden forever.

Ethan Wate, who has been counting the months until he can escape from Gatlin, is haunted by dreams of a beautiful girl he has never met. When Lena moves into the town’s oldest and most infamous plantation, Ethan is inexplicably drawn to her and determined to uncover the connection between them.

In a town with no surprises, one secret could change everything.

Beautiful  Creatures is an absolutely gorgeous book that sucks you straight into the steamy southern town of Gatlin and doesn’t let you out till you turn the last page. And even then you’ll find yourself thinking about these characters and counting down the days till book two.

It’s an amazing story of star crossed lovers, curses, family ties, good and evil and consequences. I loved Ethan and Lena’s epic romance, which is the centre of the book. But it’s not just about the lovers, they are surround by a cast of intriguing and wonderfully written characters; Amma, Uncle Macon, Link, Ridley and Marian.

Then there’s the town of Gatlin, which is almost like another character. I’ve never been to the south but Garcia and Stohl made me feel like I had. The history of Gatlin, both mortal and caster, is woven through the book so they both feel real, which I loved.

Can't wait for my turn to get this one from the library! *squee*

The cover of the book is amazing! And after reading your review, I really want to read it!!

I am midway through this book, I am listening to it on audiobook and it is fabulous!

Ah, everyone keeps saying how good it is. I feel like I'm missing out! I need to just buy the dang thing already! Great review!