Book Review: Days of Blood and Starlight by Laini Taylor 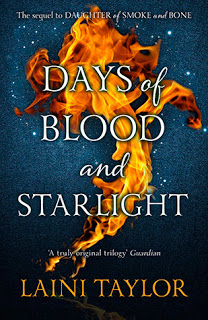 Once upon a time, an angel and a devil fell in love and dared to imagine a world free of bloodshed and war.

This is not that world.Art student and monster’s apprentice Karou finally has the answers she has always sought. She knows who she is—and what she is. But with this knowledge comes another truth she would give anything to undo: She loved the enemy and he betrayed her, and a world suffered for it.In this stunning sequel to the highly acclaimed Daughter of Smoke & Bone, Karou must decide how far she’ll go to avenge her people. Filled with heartbreak and beauty, secrets and impossible choices, Days of Blood & Starlight finds Karou and Akiva on opposing sides as an age-old war stirs back to life.While Karou and her allies build a monstrous army in a land of dust and starlight, Akiva wages a different sort of battle: a battle for redemption. For hope.But can any hope be salvaged from the ashes of their broken dream? (from Goodreads)

I closed 2011 with Daughter of Smoke and Bone and was utterly enthralled by it. It ended on such a cliff hanger that I immediately pre-ordered Days of Blood and Starlight. When it finally came I settled down, hoping to be swept away again.

And I was. The writing is as addictive as ever and I was happy to revisit well known characters. Despite it’s heft I gulped this book down in two sittings. The last quater I read at break neck speed, Laini Taylor is a master at upping the tension.

The narrative is split between Karou and Akiva and they are both is dark places, both physically and mentally. I was so sad for both of them. They are locked into situations they wouldn’t have chosen, especially Karou, but with no clear idea how they can possibly change things. It was quite a relief when Karou’s old friends Zuzanne and Mik turn up. They brought some much needed laughter, love and friendship with them. They are the hope in this book and I loved them.

I absolutely recommend this book if you’ve started the trilogy, it ends at an even bigger cliff hanger and I’m dying to see how things wrap up. But while I was certainly swept up in the lives of the characters it isn’t the easiest read. There is a lot of darkness in this book and because the writing is so vivid it’s tough to read. There was a scene where my stomach actually rolled, and I had to put the book down and take deep breaths.

Days of Blood and Starlight is addictive and gorgeously written, with brilliant characters and a fantatsic plot. It held my attention and transported me to the characters world, but it wasn’t the magical read Daughter of Smoke and Bone was. In the end I would have liked a little more starlight and a little less blood.