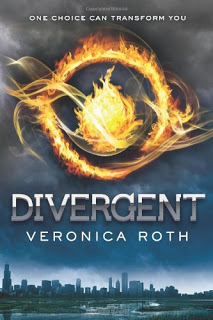 In Beatrice Prior’s dystopian Chicago, society is divided into five factions, each dedicated to the cultivation of a particular virtue—Candor (the honest), Abnegation (the selfless), Dauntless (the brave), Amity (the peaceful), and Erudite (the intelligent). On an appointed day of every year, all sixteen-year-olds must select the faction to which they will devote the rest of their lives. For Beatrice, the decision is between staying with her family and being who she really is—she can’t have both. So she makes a choice that surprises everyone, including herself.

During the highly competitive initiation that follows, Beatrice renames herself Tris and struggles to determine who her friends really are—and where, exactly, a romance with a sometimes fascinating, sometimes infuriating boy fits into the life she’s chosen. But Tris also has a secret, one she’s kept hidden from everyone because she’s been warned it can mean death. And as she discovers a growing conflict that threatens to unravel her seemingly perfect society, she also learns that her secret might help her save those she loves . . . or it might destroy her. (from Goodreads)


Divergent is one of those stay up way past bed time books. I gobbled it up and when it was over I was exhausted and exhilarated. I also had a strong desire to get a tattoo, and jump off a moving train.

I was initially skeptical about this book. I’m more of a contemporary girl and the whole Fraction thing sounded a little odd to me. I picked it up though and was sucked straight into Tris’s story.

I absolutely loved Tris, she has to fight and claw her way through everything, and I mean EVERYTHING and it was such a great journey to follow. Veronica Roth is not afraid of putting her characters through hell. Nor is she afraid of doing the unexpected, which made this such an ignore everything, nail biting read.

And there is a boy ~ because there is always a boy in books I really love ~ Four isn’t my usual crush. He’s tough and silent and actually a little scary, but I love him I do.

I can not wait for the next book to see the consequences of Tris’s actions in Divergent.

I’m also hoping we will learn more about Tri’s world and the different Fractions because when I’d calmed down from the non-stop action i found I had quite a few unanswered questions.

If you’re missing that Hunger Games high I suggest you check out Divergent.

You can read the first 100 pages at HarperTeen

Thanks to HarperTeen for the ARC