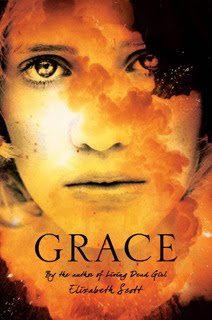 Elizabeth Scott is one of the few authors who could make me read a book about a suicide bomber. And, more, look forward to the experience.

I’m not sure what I was expecting when I opened the cover. It certainly wasn’t what I got.

Grace is a morally ambiguous character. As is her traveling companion Kerr. I thought the lines would be more clear cut. That is would be white and black, good and bad, hero and tyrant. It isn’t. Both sides in Grace commit terrible acts and believe their acts are justified because they are at war. Keran Berj has created a regime based on terror, he is a monster, and yet in their fight against him the People have become equally repugnant. They teach girls it is their sole purpose to die for the cause and take as many people with them as they can.

The best angels die pregnant. . . Keran Benj says this is inhuman but then Keran Benj hanged his own son for evil thoughts.

Both have resorted to treating people, both their own and the ones they fight as things.

Grace is a quiet book. There are no car chases, no explosions, and no countdowns to diffuse the bomb. And yet the book is tense. We travel with Grace and Kerr towards the border on a train that might be stopped at any moment. The soldiers on board have complete control and can treat the passengers as they wish. I wanted so badly for them to make it, for them both to be free.

As Grace’s story unfolds, in flashbacks, and as she learns more about Kerr, and his desperation to start a new life, her view of the world changes. She begins to question things she has done and things she believes.

Grace is marketed as a a dystopian novel, but it really isn’t. Although the setting is not recognizable and the names give no clue as to what country we might be in, the world in this book is not some horrific future. It can be found in the past and it can be seen in the present. This isn’t a world we can prevent: it’s one we’re living in. That is what makes Grace such a haunting and uncomfortable read.

It would make a great book club pick. Although I kept wanting to take a break while reading, I already want to read it again. And I really want to talk about it too.

Thanks to Elizabeth Scott for including me in the blog tour for this book.

Grace is published by September 16th by Dutton.


All quotes taken from uncorrected ARC