Book Review: The Extraordinary Secrets of April, May and June by Robin Benway 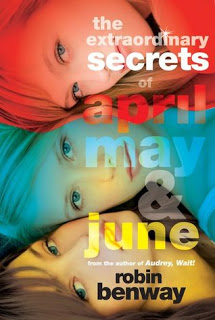 If you loved Robin Benway’s fresh, funny and utterly wonderful Audrey Wait and you miss the magic
and sisterly squabbles of Charmed (before it went all crazy) then The Extraordinary Secrets of April, May and June is the book for you.
April, May and June are three sisters with distinctly different personalities, complex sisterly ties and
emerging magical powers. The book is told in alternating chapters by each of the sisters.
As I would come to the end of each chapter I’d find myself thinking nooo I want more of April or May or June. Only to be completely hooked by the voice of the next sister two sentences into her chapter.

I loved all three sisters and their interactions with each other felt spot on. May ended up being my favourite mainly for the sarcastic remarks but also because she is the most unsettled of the sisters by her power, wondering if the ability to become invisible stems from feeling invisible. I also loved her scenes with tutor Henry.

I did adore June’s utter glee at being able to read minds and April’s surprise and horrow when she had flahes of her own romantic furture.
Things wrap up nicely by the end, the mystry of April’s visions being solved satisfactorily but there are many unanswered questions and I can’t wait to see what Robin has in store of the sisters next.
FTC: ARC received from the publisher
Posted by Alexa at 20:41