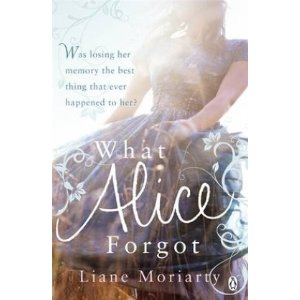 Alice is twenty-nine. She is whimsical, optimistic and adores sleep, chocolate, her ramshackle new house and her wonderful husband Nick. What’s more, she’s looking forward to the birth of the ‘Sultana’ – her first baby.

But now Alice has slipped and hit her head in her step-aerobics class and everyone’s telling her she’s misplaced the last ten years of her life.

In fact, it would seem that Alice is actually thirty-nine and now she loves schedules, expensive lingerie, caffeine and manicures. She has three children and the honeymoon is well and truly over for her and Nick. In fact, he looks at her like she’s his worst enemy. What’s more, her beloved sister Elisabeth isn’t speaking to her either. And who is this ‘Gina’everyone is so carefully trying not to mention?

Alice isn’t sure that she likes life ten years on. Every photo is another memory she doesn’t have and nothing makes sense. Just how much can happen in a decade? Has she really lost her lovely husband for ever? (From Goodreads)

I picked this one up after reading a review by Nomes over at InkCrush. As I read I was thinking it sounded exactly like my kind of book. Then I got to the recommendation –

“this is one for people who love their chick-lit well written, breezy and fun and also a little bit deeper at heart. Also for fans of Jaclyn Moriarty who are looking for an adult read :D”
– well, my love of Jaclyn Moriarty has been well documented on this blog. So I had to run straight out and buy her sister’s novel.
Nomes is absolutely spot on, the style is very reminiscent of Jaclyn. They’ve a way of looking at the world, a way of writing and a humour – What Alice Forgot is a funny (shake the bed laughing funny) book – that is very similar. It has me hoping that maybe they write letters to each others that they’re planning to publish one day 🙂 I would buy that book in a heartbeat.
What Alice Forgot isn’t just a light hearted humorous read. It has depth and it deals with serious issues, but with such a deft touch that it doesn’t tip into depressing. You aren’t putting the book down and flipping the TV on to find an old episode of Friends to cheer yourself up.
There’s so much to love about this book – the premise (I can’t imagine waking up and thinking it was ten years ago!), a swoony romance, brilliant kids who I’d like to meet, a Grandma who blogs, a Mom who salsa’s, a fractured sisterly bond, close friendships, and the consequences of choices. It also has a little mystery running through it, that was constantly ticking over in the back of my mind as I read. I just gobbled it up and adored every second I spent inside Alice’s head.
Due to Alice’s memory loss, it does have that YA coming of age vibe – finding out who you are and deciding who you want to be. Which is why I think it will appeal to fans of YA – plus it is just brilliant. So if you love brilliant books, it should appeal 🙂
What Alice Forgot is available in the UK right now and out in the USA on 2nd June.

I think the UK scored the best cover. I want that dress!
Posted by Alexa at 12:24