Book Review -WHAT HAPPENED TO GOODBYE by Sarah Dessen 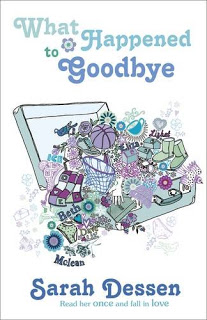 Since her parents’ bitter divorce, McLean and her dad, a restaurant consultant, have been on the move-four towns in two years. Estranged from her mother and her mother’s new family, McLean has followed her dad in leaving the unhappy past behind. And each new place gives her a chance to try out a new persona: from cheerleader to drama diva. But now, for the first time, McLean discovers a desire to stay in one place and just be herself, whoever that is. Perhaps Dave, the guy next door, can help her find out. (from Goodreads)

When What Happened to Goodbye  arrived I wanted dive in straight in, but I didn’t, because a Sarah Dessen novel should not be read in snatched moments and fits and starts, it should be savored. So I waited and then spent a weekend relishing being back in Lakeview.

The thing about Sarah Dessen is you know what you’re going to get ~ a gorgeously written coming of age story, with a relatable main character, sa–woony guys (usually with tattoos),  interesting secondary characters, parents who have their own problems, but care about their children and an atmospheric setting. I would say you also get summer, but it snows in this one (yes, snow, in a SD novel!).

As well as all that you get that magic that truly amazing writers have. I sink into Sarah Dessen’s books and lose myself. So that even though many of them have the same ingredients they all have their own unique flavour. It’s like the difference between a North Carolina beach and a Caribbean beach – water, sand, blue sky – completely different experience.

What Happen to Goodbye is her tenth novel, and though I could have done with a little more romance (you know I love the kissing), a little more of Deb (she deserves her own book) and some backstory on Jason (oh what happened to him, has me intrigued!) it is a summer must read for fans of YA.

What Happened to Goodbye releases 10th May in the USA and 2nd June in the UK.

Thanks to Penguin for the review copy.