Today I’m delighted to welcome Kim Harris Thacker to the blog. Kim is one of the nicest people I have ever not met! We became blog buddies about a year ago (in fact she won last year’s Christmas Countdown!) and have since become good friends. Kim blogs weekly at Kim Harris Thacker: Writer, she’s always interesting and original, and has some great tips on editing and writing. I love her view of the world and she has introduced me to some wonderful books, so I couldn’t wait to find out her favourite couple. Thanks for coming by Kim.

My favorite couple of the year would have to be Hermione Granger and Ron Weasley.  I just saw the movie of Harry Potter 7 Part 1, and while I adore the Harry Potter books (J.K. Rowling is a genius), it was nice to see the romantic tension on screen.  Though Hermione and Ron don’t officially come together in this first part of the seventh movie, I could see their romantic relationship building.  And after all the books and all the movies, I thought, “It’s about time!”  Their romance is just so right.  They’ve been friends for years, they’ve been through more together than the average couple (at least, they’ve face a heckuvalot more death together than the average couple), and they’re just plain perfect for each other.  Ron tries so hard to impress the ever-intelligent Hermione, and Hermione is so understanding of Ron (except for that bit where he ran off in the forest–but he deserved what he got from her, in my opinion, horcrux hanging around his neck and making him wacky or not!).

Ginny and Harry also have a tender romance, but perhaps because Ginny doesn’t get as much book or screen time as Hermione and Ron, I just don’t long for her and Harry to be together like I long for Harry’s best friends to be together!  Don’t get me wrong–Harry deserves love in his life, if anyone does.  But his romance with Ginny doesn’t make my heart zing like Hermione’s and Ron’s romance does. 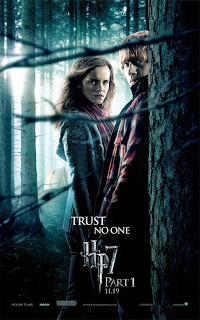 What’s your favorite romantic or hinting-at-romantic scene in the seventh Harry Potter book or in part one of the seventh movie?