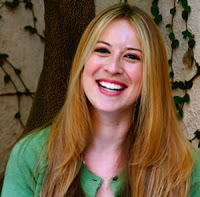 Welcome to guest blogger Robin Benway, author of my number four pick Audrey Wait!  and the upcoming The Extraordinary Secrets of April, May and June (August 3rd 2010 by Razorbill).  Thanks for sharing Robin!
I’ll admit, I tuned into “Glee” because I’m a sucker for anything related to musical theater. And musical theater that involves a cover of Journey’s “Don’t Stop Believin'”? Sign me up for two, please.
That’s not why I stayed, though. I stayed because of the characters, of the way they supported and betrayed one another, the way they fell in and out of love with each other. I stayed to watch Kurt come out to his mechanic father and pregnant cheerleader Quinn get kicked out of her home by her Glenn Beck-viewing parents. I watched as teachers and guidance counselors supported their students while their personal lives fell apart, and while straight-A students and James Dean wannabe rebels went against their very nature and became more than who we as viewers thought they could be. And I’ll admit it, sometimes I wanted the star diva Rachel to get a slushie in the face. There, I said it. I feel better now.
But most of all, I love the fact that in a band rehearsal room somewhere in middle America, I watched as students came together and became better than the sum of their parts. I hope all high schoolers have that experience. If they don’t, I hope they find it soon.
In a show that is too easy to stereotype (“Theater geeks! Musical numbers! High school!”), I watched as characters became neither good nor bad, just like real people. Just like the rest of us, minus the awesome soundtrack.
Robin I completely agree. I adore Glee for all the same reasons and wouldn’t it be lovely if we could live life to a soundtrack?
Posted by Alexa at 07:59

I haven't had time in my life to add Glee! into the schedule. Sounds like I'm missing out 🙂

And I'm so looking forward to Robin's next book. It feels like it's been forever since I read her debut (which actually, I think it has, lol) so I need something new from her and this sounds great.

Hi Robin 🙂
Thank you for sharing here today. I like how shared your love of music.
Merry Christmas!
RKCharron

Wonderful post!! I adored Audrey, Wait! and was excited to see your thoughts on a show I am in love with too. teenage drama set to music – what more do you need?