I am thrilled to welcome Sarah Rees Brennan to the blog today. The Demon’s Lexicon is one of my favourite series, I can’t wait to see how it ends and Sarah has created some of my favourite fictional characters. Her books make me laugh, and cry and, stay up far too late to see what an earth will happen to the Ryves brothers next. Actually that should be what on earth the Ryves brothers will do next, Alan and Nick are very pro-active!


I couldn’t wait to read her guest post and of course it is wonderful and funny. I hope you all enjoy it. Thanks Sarah! 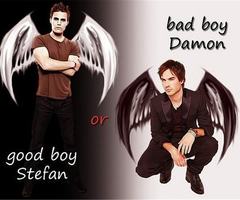 Image from weheartit
Well, since the rules were changed to accommodate my fictional brothers, I felt like it was only fair to pick some fictional brothers too!
And therefore I nominate to you… Damon and Stefan Salvatore, of CW’s The Vampire Diaries.
You know how it is. An angsty vampire, loving a human girl from afar, finally winning her love…
His crazy wayward older undead brother, who likes to show up and kill people for larks.
Things have just been really tense between them ever since they were human and both sleeping with the same lady. (Ew! What! They’re brothers! … No, it’s cool, because their vampire girlfriend compelled Stefan to think it was okay. … Don’t ask about Damon. … Don’t judge. They were kinky in 1864, all right?)
You know how it is, being an angsty vampire. You’re just so sorry about all the terrible things you did in the past: forcing your brother to turn into a vampire. Being a blood junkie. (Being a blood junkie all those times you relapsed.) Eating your dad.
(Stefan has a lot to be upset about okay.)
And then your brother just shows up and hits on your girlfriend! (Stefan: Damon this is not 1864 okay. Elena: What happened in…? Stefan: I DON’T TALK ABOUT 1864.) And he kills all these people, which is quite upsetting as well! Especially if he kills your best friend. Actually people are starting to talk about killing your brother! And intellectually you can even sort of see their point! Soon the town will have hardly any people yet.
… Except the thing is.
The thing is.
You still love your psychotic mass-murdering brother. And he’s really funny. And he has a heart. SOMEWHERE IN THERE. And he starts to get on with your girlfriend, and he rescues you from torturers, and he even helps you protect innocent people a little bit, and when you relapse he’s sort of there for you. It’s starting to seem less like he’s stalking you while being evil and more like he’s living with you while being quippy. (The crucial difference is that he winds the clocks now.)
Of course, sometimes he seems to get on with your girlfriend a little too well. But you can learn to cope. (Damon: I have feelings for your girlfriend. Stefan: Oh Damon. Damon: I know I am so bad. Stefan: You have FEELINGS. Damon: … Stefan: The thing to do is hug this out.)
And sometimes he relapses and you know, snaps a neck. One or two, here or there. But you can learn to cope. (Elena: I will never forgive him! Stefan: But look at his face! WHO COULD STAY MAD AT THAT FACE. Damon: has that face.)
Basically you might just have a shot at being a evil-fighting, undead duo of awesomeness.
Just as long as no-one brings up 1864.
(The first rule of brotherhood is that nobody ever talks about 1864.)
Thanks so much Sarah. Now I have to go and give The Vampire Diaries another chance because it sounds much more amazing than that pilot led me to believe.
Note: If you love The Demon’s Lexicon series you should check out Sarah’s blog (well you should check it out anyway, it’s very funny). Her Christmas present is the rather wonderful short story, Nick and Jamie Go to the Movies, part 1 and part 2. It’s set at the same time as The Demon’s Covenant so there are spoilers (pretty huge spoilers), but it’s very funny and a little sad too. Plus, we learn Alan likes costume dramas and prefers reading to football. Oh Alan, I didn’t think I could love you more, but apparently I can. I bet you never leave the milk out the fridge and always rinse your plate before putting it in the dishwasher too.
Posted by Alexa at 12:00