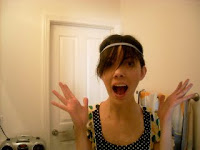 Today’s guest post is from the fantastic Jordyn of Ten Cents Notes. I don’t know Pam and Jim, having only seen the UK version of The Office but I really want to see them in action now. Another one for the netflicks list!  Thanks for sharing Jordyn.

I often prefer the ordinary over the fantastic. I think there’s a sort of beauty and wonderfulness in things that are everyday.

This is maybe why I love Jim and Pam more than any other television couple. They didn’t meet somewhere spectacular; their story isn’t filled with fantastic coincidences and moments. They work at a paper supply company. They have lunch together in the break room. The strangest thing they encounter is, not mystery, murder, or mayhem, but Dwight. (And Dwight is, let’s admit it, pretty strange.) The point is, the story of Jim and Pam is remarkably unromantic.
These two characters work boring 9-5 jobs with a host of people more interesting than themselves (Dwight, who owns a beet farm; Angela, the cat lady; Michael, who fancies himself a stand-up comedian). Their lives are unremarkable. They get excited about fooling Dwight into thinking it’s Friday when it’s actually Thursday. Pam is engaged to someone else for the first two seasons of the show. Jim is just a friend; the closest he comes to an actual date with her is grilled cheese sandwiches after work on a rooftop swarming with mosquitos. Jim is the everyman and Pam is, quite frankly, pretty boring.
There’s absolutely no reason this love story should be interesting, much less engrossing.
And yet, it is. There’s a sort of pathetic beauty in watching Jim wonder if he’ll be invited to Pam’s wedding to her fiance in the first season. There’s something compelling about how obviously right for each other they are – the in-jokes, the pranks they play on their coworkers, the stupid conversations they have that you can only really have with someone who operates on the same wavelength as you. There’s something about the two of them and their boring, unromantic love story, that’s better than many other television relationships. The characters, emotions and actions come off as real even though we know they’re fiction.
And then television does something surprising. Something that doesn’t happen very often in the land of make-believe couples: it gives us what we want. After two seasons of Pam being engaged to Roy and another season of Jim dating the extremely likable Karen Fillipeli, the two characters end up together. And, like everything else in their story, the scene is so understated, so simple, and so beautiful. More than that, after they’re together, they stay together. This year, with no end to The Office in sight, there was a wedding and the story of the best television couple continues on.
Jordyn is an almost-twenty blogger, aspiring novelist, and Twitter fiend. She likes muffins better than cupcakes and winter better than summer.
Posted by Alexa at 12:00