Countdown to Christmas No 2 – Nick and Alan 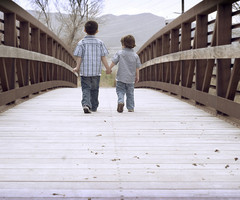 Image from Weheartit
Obviously the swords and knives are concealed!

Ah Nick and Alan, those demon fighting brothers, from Sarah Rees Brennan’s marvelous The Demon’s Lexicon Trilogy. This was the pair that started the whole alternative couples thing that I mentioned. Oh, I do love those Ryves brothers.


So Nick and Alan definitely deserve their place on the list. Although I have everything crossed that next year Alan will be making an appearance here with someone else!

Side Note: Mae is one of my all time favourite characters. How can you not love a girl who has pink hair, adores her brother, is independent and tough and wears t-shirts that proclaim Heathcliff had it coming. If you’re looking for a strong female lead, look no further than Mae. Plus she isn’t a slayer, witch, vampire, fairy, she can’t see dead people or read minds, no one gave her mystical powers. She’s just amazing, all on her own.