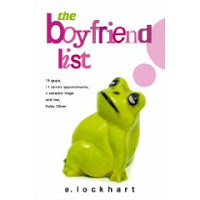 I’m cheating slightly this week because the UK cover is very similar to the old USA cover. The frog is in a different position and the font is a lot cuter, but it’s more or less the same.  I’ve been dying to talk about these new covers though, so go with me.

The Ruby Oliver books hold a special place in my heart. After Twilight they were the first YA books I read and they hooked me on YA. I adore E. Lockhart’s writing. It’s so funny, it’s deceptively simple and she coveys so much of what’s going on underneath with just a single line rather than epic internal monologues.  Basically I want to grow up to write like E.

It was the cover of The Boyfriend List that made me pick it out from all the YA titles on display. That frog was just so damn cute.  The covers kept getting better too. Book two The Boy Book had a penguin (my favourite animal) and book three The Treasure Map of Boys had a marshmallow snowman.  Does it get much better than a marshmallow snowman? Wouldn’t you die of happiness if that was your cover? 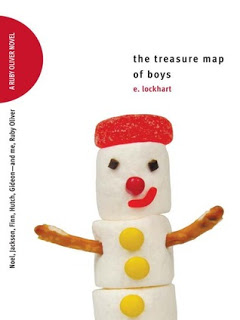 But the frog, penguin and snowman have gone.

They’ve been replaced by a very pretty girl (very irritating in the middle of a series). The new covers are lovely and I do like them. They also match well with the paperback version of E. Lockhart’s other book The Disreputable History of Frankie Landau-Banks.

that first day in the bookstore I wouldn’t have picked them up.

I just don’t think they capture the spirit of the books as well. That funny, quirkiness that I love about Ruby and her family.

I always imagined Ruby to look like a better dressed version of Velma from Scooby Doo. The smart, funny girl, whose always the best friend. Except in Ruby’s case she totally got the guy (or guys). The girl on the cover though, is totally a Daphne.

What do you think? Which do you prefer?

I also love the Ruby Oliver series – and I love the frog, penquin, and snowman covers. I'm much happier seeing Ruby in my mind's eye than seeing her on the cover!

I love the frog cover. The other one is fine, but it doesn't stand out from a lot of others. The frog would make me smile & check out the blurb. The snowman, I would have to buy on sight.

Hm is it fair enough to say I do not want either? Neither of those covers excites me to read the book…

A marshmallow snowman??? How wonderful! Quirky covers grab me, because I trust they belong to quirky books. 🙂

Alison – Glad you liked it and as I discovered YA from your blog I'd better say Thank you, too.

Jemi – Go and buy them! The books are fab.

Pam – it is absolutely fair but you should read them anyway, the books are so good.

Kim – it is a perfect cover for the book! Go get it, I was right about PERFECT YOU 🙂

I'M SO GLAD SOMEONE IS FINALLY SPEAKING UP ABOUT THIS NONSENSE!!

i, too, was totes appalled when i saw the new cover on e. lockhart's website. esp. cos i hate it when book covers try to tell me what a character looks like instead of letting me handle all of the imagining.

yr velma vision is totally spot on (plus fishnets!).

poshdeluxe – great name and thanks. I just don't understand why they changed them because they were so perfect. Did they think the covers looked to young?