The lovely and inspired Nomes of InkCrush has created 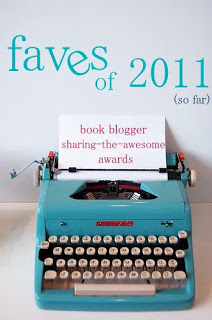 In her words (which are so much better than mine ~

it’s already (nearly) half-way through the year (!)
and i am SUCH a huge fan of lists so i have created a kind of book blogger sharing-the-awesome book awards to celebrate all the cool stuff i’ve read so far this year. (which is just a fun-funky style book awards/survey thingy). i will be running it over three posts* staggered throughout the last week of june. (day one beginning this friday)

Hop over to InkCrush for the rules and to sign up. 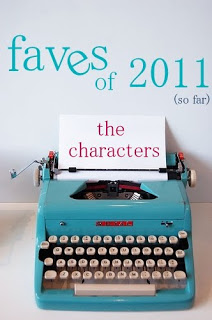 1. best female POV ~ Daisy How I Live Now by Meg Rosoff. Definitely the most unique/engaging voice I’ve read this year.


2. best male POV ~ Robin from What my Girlfriend Dosn’t Know by Sonja Sones. Oh I loved Robin even when he was doing stupid things I loved him!


4. who i so want to be best friends with ~ Piper from Five Flavors of Dumb by Antony John and Deb from What Happened to Goodbye by Sarah Dessen. I love Deb I really want a whole book about her and for her to fall for Jason 😀


5. who i fell completely in love with (new literary crush) ~ I’m pretty smitten with Engenides from The Queen’s Thief and Eli from Between Here and Forever by Elizabeth Scott.


7. best character twist (who you loved then hated or vice versa) ~ The Queen of Attiolia

10. broke your heart the most ~ Alan in The Demon’s Surrender, oh Alan I love you and you have so much crap to deal with. Also a scene from Five Flavors of Dumb with Finn and Piper (the one with the guitar for people who’ve read it)
11. best/worst character names ~ Piper from Five Flavors of Dumb & How I Live Now and Eugenides from The Queen’s Thief (could I get away with calling my child this???) for the best. And Mclean from What Happened to Goodbye for the worst – seriously she sounds like a toothpaste!


Bonus 5 Best Covers from Books I read this year