This week I got Heist Society by Ally Carter. 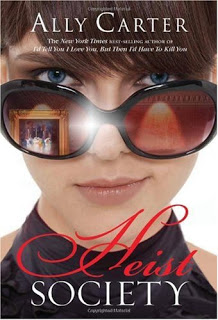 When Katarina Bishop was three, her parents took her on a trip to the Louvre…to case it. For her seventh birthday, Katarina and her Uncle Eddie traveled to Austria…to steal the crown jewels. When Kat turned fifteen, she planned a con of her own–scamming her way into the best boarding school in the country, determined to leave the family business behind. Unfortunately, leaving “the life” for a normal life proves harder than she’d expected.

Soon, Kat’s friend and former co-conspirator, Hale, appears out of nowhere to bring her back into the world she tried so hard to escape. But he has good reason: a powerful mobster has been robbed of his priceless art collection and wants to retrieve it. Only a master thief could have pulled this job, and Kat’s father isn’t just on the suspect list, he is the list. Caught between Interpol and a far more deadly enemy, Kat’s dad needs her help.

For Kat there is only one solution: track down the paintings and steal them back. So what if it’s a spectacularly impossible job? She’s got two weeks, a teenage crew, and hopefully just enough talent to pull off the biggest heist in history-or at least her family’s (very crooked) history.

IMM is hosted by The Story Siren.

What did you get this week?

What a great title, cover and story line! Sounds like lots of fun!!

Heist Society looks so cute. I hope you enjoy it. Happy reading!

Warner Brothers have purchased the rights to this book! It could be a movie come 2011! 🙂

<i've heard great stuff about this book! Hope you like it 🙂

I've heard good things about this one, but haven't had a chance to pick it up yet. Happy reading!

Your book looks to be a fun read. Here's Mine.