Just one book In my Mailbox this week. It was delivered as Snowopocolypse was beginning. Thank you UPS!!! 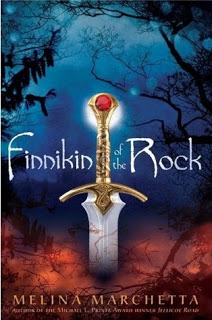 At the age of nine, Finnikin is warned by the gods that he must sacrifice a pound of flesh in order to save the royal house of his homeland, Lumatere.

And so he stands on the rock of three wonders with his childhood friend Prince Balthazar and the prince’s cousin, Lucian, and together they mix their blood. And Lumatere is safe.

Until the ‘five days of the unspeakable’, when the King and Queen and their children are slaughtered in the palace. And an imposter king takes the throne.
And a curse is put on Lumatere, which traps those caught inside and forces thousands of others to roam the land as exiles, dying of fever and persecution in foreign camps.

But ten years later Finnikin is led to another rock to meet the young novice, Evanjalin. A girl plagued by dark dreams, who holds the key to their return to the Land of light…

I’m only a quarter of the way through this but I have no hesitation in recommending it.  It’s beautiful and brutal and has the kind of compelling characters you’d expect from a Melina Marchetta book.

IMM is hosted by The Story Siren.

What did you get this week?

Labels: Finnikin of the Rock, In My Mailbox, Melina Marchetta

Ohh that books looks so good!!! 🙂
Just added it to my Wishlist!!

My IMM is here

I really looking forward to reading this book! Happy reading! 🙂

I've been wanting this one! It sounds so good. Don't you love finding a book you just can't put down?

Finnikin the Rock looks like one I would read. Here's Mine

nice. read a good review of this.

must check it out!