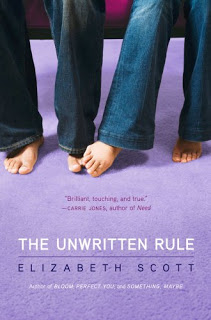 Everyone knows the unwritten rule: You don’t like your best friend’s boyfriend.

Sarah has had a crush on Ryan for years. He’s easy to talk to, supersmart, and totally gets her. Lately it even seems like he’s paying extra attention to her. Everything would be perfect except for two things: Ryan is Brianna’s boyfriend, and Brianna is Sarah’s best friend.

Sarah forces herself to avoid Ryan and tries to convince herself not to like him. She feels so guilty for wanting him, and the last thing she wants is to hurt her best friend. But when she’s thrown together with Ryan one night, something happens. It’s wonderful…and awful.

Sarah is torn apart by guilt, but what she feels is nothing short of addiction, and she can’t stop herself from wanting more.


The Unwritten Rule has, a main character you can relate to and to root for. It has a friendship that seems very real, in both it’s good elements and it’s toxic ones. It has a toe curling romance. And it has kissing, lots of kissing, which is never a bad thing.

This book is adorable. Underneath the adorableness, there are the themes of what it means to be a good friend, learning to recognizing your own worth, standing up for yourself, and being brave about what you really want. There were many lines that just floored me, in how brilliantly they expressed truths, that we rarely acknowledge. There is a lot of introspection and soul searching from Sarah in this book, but she never tips over into being annoying, and the story moves at a quick pace.

I also wanted to mention Sarah’s parents. They aren’t in the novel a lot, but when they were I loved them. I loved that they were different. Parents are hard to write, and Elizabeth always nails them perfectly. Whether they are distant and unloving, worried but distracted, or just lovely, as with Sarah’s parents. I also liked that Sarah’s Dad is old, he was 50 when she was born because parents are getting older, and it was nice to see it reflected in a novel.

And because I love this book so much, I’m giving away a copy.

Edit: Contest Closed. Rose won! Congratulations and thanks so much to all who entered.

Oh what an amazing contest! I've been wanting to read this book for months! 🙂 And thanks for having this contest open internationally! 🙂

I'm seeing this book all over the blogosphere. Thanks for entering me in the conest!

An International Contest with such an amazing book? Excellent.
Its certainly one of the ones i'm looking forward to reading…

I love Elizabeth Scott! Can't wait to read this one.

I would love to win this book!

I've been wanting to read The Unwritten Rule for awhile now. Please enter me.

Love Elizabeth and the theme sounds interesting so I'm in.

Elizabeth Scott!!! Yes please! I would love to win this book!

Thank you for such a fabulous giveaway :).

Awesome contest. I have loved every Elizabeth Scott book so far so I am really looking forward to reading this one. =]

Please count me in.

Count me in please. This book sounds great!
throuthehaze at gmail dot com

Oohh, count me in, I have been meaning to pick this one up!

No need to enter me, but I really enjoyed this one as well. Nice review!