A little bit of TV reviewing this Friday.


The Fades is my current TV obsession, it’s just so good! A sort of Buffy the Vampire Slayer, with ghosts/zombies, set in a grey and vaguely grim england.


Paul – the outsider/chosen one, given to bad dreams of a coming apocalypse. Fond of strawberry coloured cords, his sister’s best friend, and dessert (loved how he and Mac were always eating dessert) 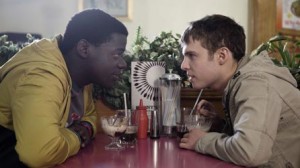 Mac and Paul and dessert!

Mac – Paul’s best friend. Utterly fabulous and steals every scene he’s in. Also does a brilliant re-cap at the beginning of every episode.


Anne – Paul’s twin sister. Starts off as a mean girl with a big mouth, but is utterly brilliant in later episodes.


Neil and Sarah – members of the Angelics. A secret group who can see ghosts and guard the world against them.


Paul is seeing a therapist due to his strange and violent dreams. Then one night he sees a women killed in a abandoned shopping centre and discovers he is an Angelic. The angelics are a secret group of people who can see ghosts.


The ghosts are starting to be able to touch things and people. The ghosts would like to be alive again. This is not good news for anyone.


The main reason I’m blogging about it, apart from my the fact that I love it deeply, is because if you are a writer, then The Fades is a brilliant case study of how to create a world, build tension, develop character, be funny, twist expectations and always keep your viewer/reader guessing. Episode Four in particular is some of the best storytelling I’ve seen.


If you can get your hands on this, watch it. I am counting down to Series Two.


Although a warning –  as the BBC puts it The Fades contains violence, strong language, disturbing scenes and some sexual content.

Email ThisBlogThis!Share to TwitterShare to Facebook
Labels: television, The Fades