Waiting on Wednesday for Plain Kate 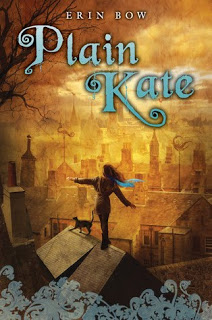 I saw the cover of this book, and I fell in love with it. Mainly, because it reminded me of Northern Lights by Phillip Pullman. That could be Lyra and Pantalaimon, on the roofs of Jordan College. Then I looked it up on goodreads and – wow! – it sounds amazing. I can’t wait to read this one.

The drizzle had broken into patches as they walked. As Drina scooped up the pale sand, Kate found herself standing in the smudge of shadow cast by the deadfall. She had never before noticed the way shadows gave things weight, made them look heavy and real and connected to the ground. Without hers…

She edged into the light.

Her shadow looked strange and thinned. It seemed not cast against the ground, but floating above it, like a fog. What Linay had said was true: No one would notice this, at first. It was just an uneasy little change, like the half-felt movement of a boat that slowly induces a great sickness.

Plain Kate lives in a world of superstitions and curses, where a song can heal a wound and a shadow can work deep magic. As the wood-carver’s daughter, Kate held a carving knife before a spoon, and her wooden talismans are so fine that some even call her “witch-blade”: a dangerous nickname in a country where witches are hunted and burned in the square.
For Kate and her village have fallen on hard times. Kate’s father has died, leaving her alone in the world. And a mysterious fog now covers the countryside, ruining crops and spreading fear of hunger and sickness. The townspeople are looking for someone to blame, and their eyes have fallen on Kate.
Enter Linay, a stranger with a proposition: In exchange for her shadow, he’ll give Kate the means to escape the angry town, and what’s more, he’ll grant her heart’s wish. It’s a chance for her to start over, to find a home, a family, a place to belong. But Kate soon realizes she can’t live shadowless forever — and that Linay’s designs are darker than she ever dreamed.

What are you waiting for?

This sounds SO GOOD!!! I love witch stories.