Waiting On Wednesday for This Is Not A Test

A new Courtney Summers and it’s about zombies. I am pre-ordering this one as soon as it’s available. 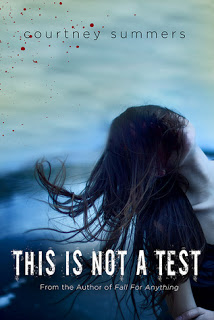 It’s the end of the world. Six students have taken cover in Cortege High but shelter is little comfort when the dead outside won’t stop pounding on the doors. One bite is all it takes to kill a person and bring them back as a monstrous version of their former self. To Sloane Price, that doesn’t sound so bad. Six months ago, her world collapsed and since then, she’s failed to find a reason to keep going. Now seems like the perfect time to give up.

As Sloane eagerly waits for the barricades to fall, she’s forced to witness the apocalypse through the eyes of five people who actually want to live. But as the days crawl by, everyone’s motivations to survive begin to change in startling ways and soon the group’s fate is determined less and less by what’s happening outside and more and more by the unpredictable and violent bids for life-and death-inside.

When everything is gone, what do you hold on to?


“Waiting On” Wednesday is a weekly event, hosted at Breaking the Spine, that spotlights upcoming releases that we’re eagerly anticipating.
What are you waiting for?
Posted by Alexa at 22:07

Email ThisBlogThis!Share to TwitterShare to Facebook
Labels: Courtney Summers, must reads, This is Not a Test, Waiting on Wednesday